Resurrection, by Invitation Only


Jesus said, “My God, my God, why have you forsaken me?” (Matthew 27:46).
I don’t know about you, but I can’t get those words out of my head when I hear the Passion Gospel.  Amid the tragedy of the excruciating death of God’s innocent servant, I can’t stop hearing that cry:  My God, my God, why have you forsaken me?
The reason that line haunts me is because it begs the question, the central question Palm Sunday invites us to struggle with:  Who is this man who’s calling out to God?  Our readings today point us toward an answer, but they’re stops along a journey – a journey we know as the way of the cross.
Outside, in the day’s first Gospel proclamation, we hear the crowd hailing Jesus as the king.  If we’d been in occupied Palestine 2,000 years ago, we would have seen this amazing man as the sign of our hope – hope for release from Roman captivity by God’s anointed king, which is what “messiah” means.  We would have been cheering for him as he entered the holy city in triumph, riding on a donkey like one of Israel’s ancient kings, because we would have hoped he’d be the one to bring us freedom. 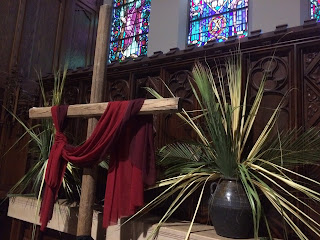 Five Questions We Ask in the Dark, Part 5: What's Next After Death?